I have this fabulous stack of string blocks 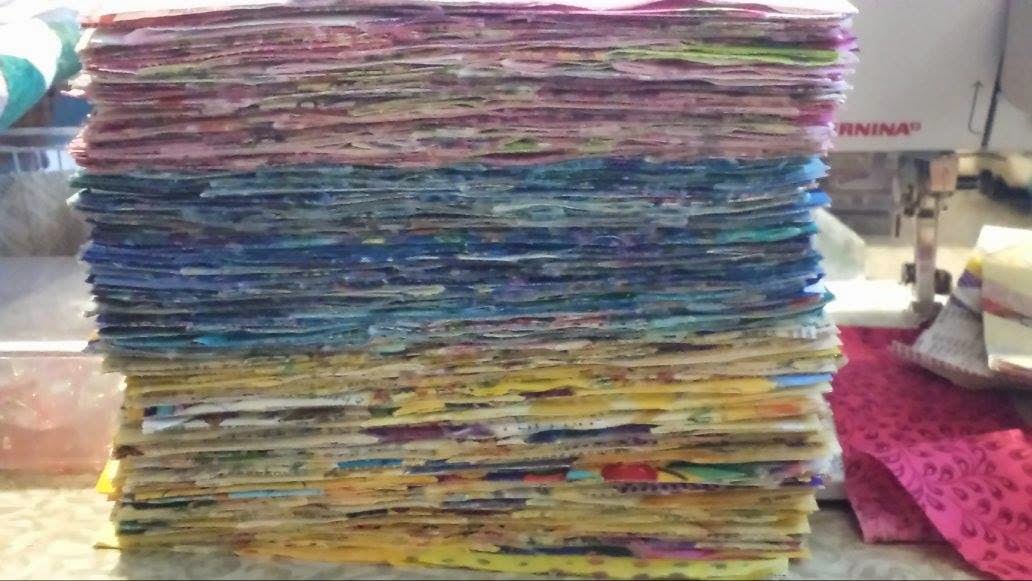 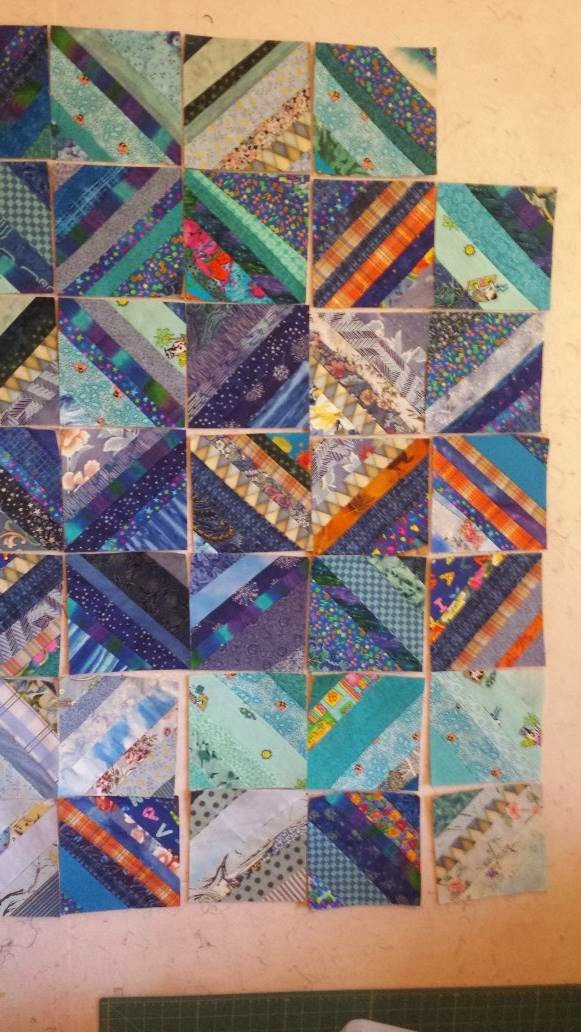 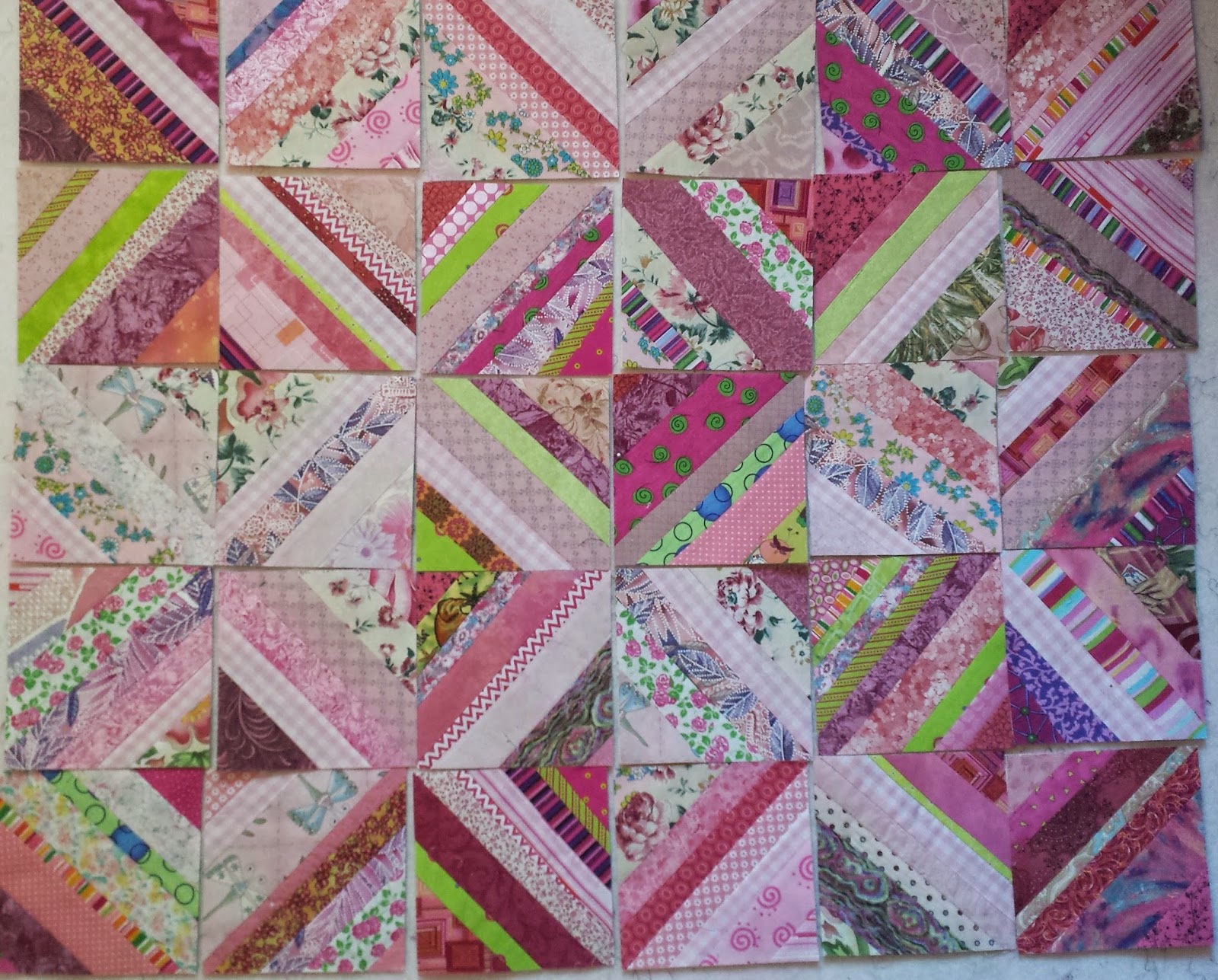 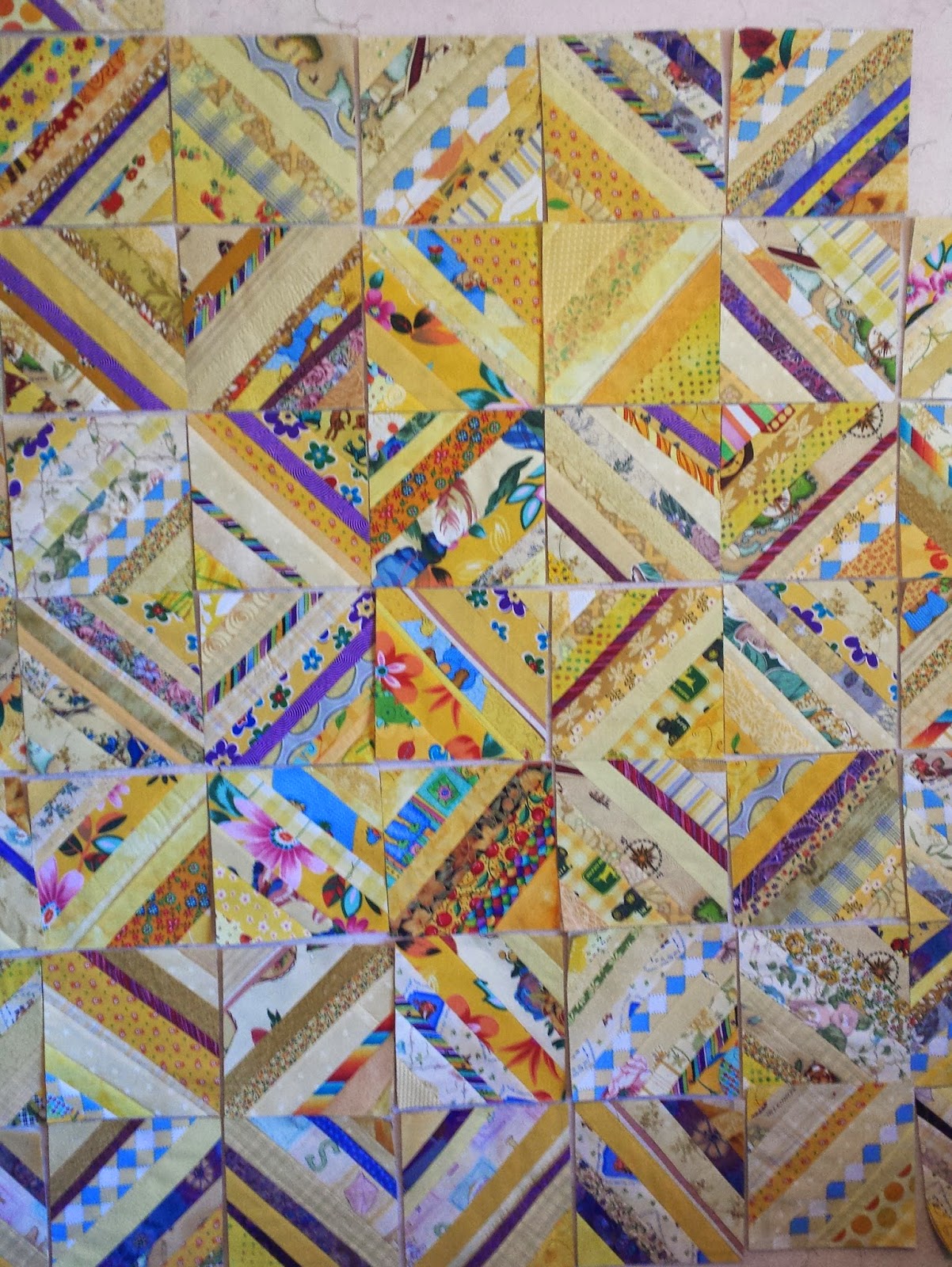 and soon to join them are purples. My blocks are 6.5" at this point in the game. I will continue to make string blocks while I am continuing to make borders to complete RRCB...so close to being finished and I LOVE this quilt. Pattern is found in Bonnie Hunter's String Fling. 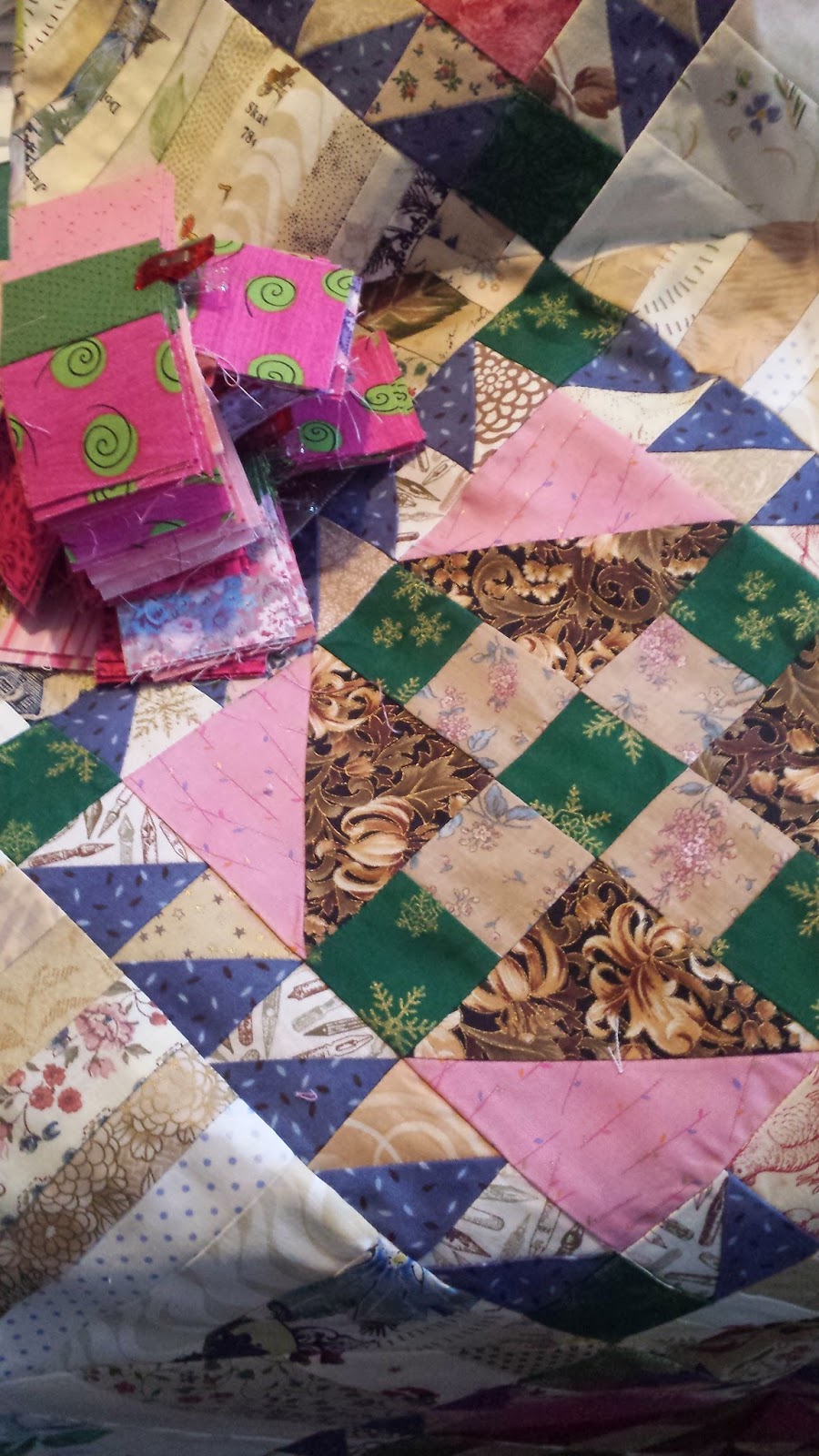 Thanks for a wonderful time YELLOW. See you again often and soon. To see what others have accomplished with a whole month of creating with the sunshine of colours, head over to SoScrappy and to celebrate scrap quilting, have a look at Oh Scrap!

That will be me soon enough, but in the meantime it is time to retire the colourwash squares, liberating another bin and getting a new quilt top done I am using them as leaders and enders for Ty's Tumalo Trail Quilt while working on every quilt that comes up the pipe. It is all win-win-win. 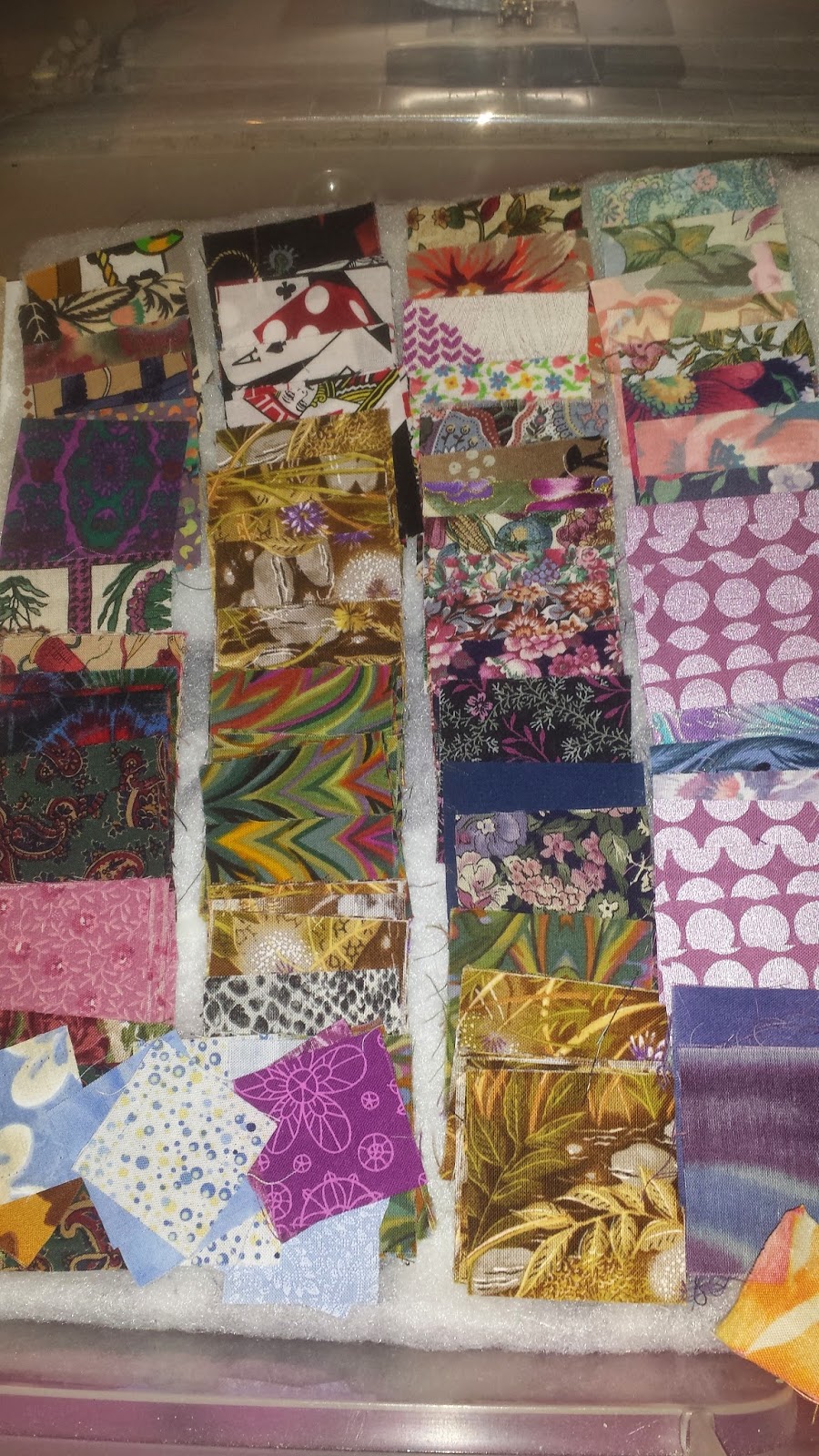 Back when colour wash theory was riding a ground swell of creativity, I embarked on what turned out to be a monumental quilt for my daughter Diana. It was the perfect vortex of creativity/need. Diana was graduating high school, May 2001. My guild, Edmonton and District Quilters' Guild, was doing the millennium 2000 x 2" Square pieces challenge. But I had a full time job, and a part-time job (Returning Officer and the Premier had called an election!!). What to do but make those two challenges into one quilt.


You have to know that between Diana and I, we have this THING about Zebras. When Diana was ~3 years old we were looking at a ABC book, and when we came to the Zed, of course there was a picture of a Zebra. Diana in a squeaky little 3 year old voice said, "that is the ugliest horse I have ever seen".  And that was how the association of Diana and Zebras began. 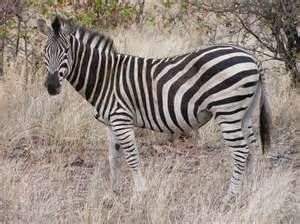 Back to the colourwash (CW) quilt. If I was to make a CW for Diana it had to be about Zebras. But every CW book that I borrowed from the public library or the guild library was about flowers, garden, and birds. At which point older daughter was sitting across the table from me watching me go over books, eliminating one book after another until she happened to see a CW peacock. She advised me to look at it upside down. It was a peacock, with tail at rest and bird looking over its right shoulder. Forget that it was a bird, it was the perfect outline of the continent of Africa. BAM...I knew what I was going to do. Referencing a vegetation (and lack of) map of the continent and that was my colour grid. 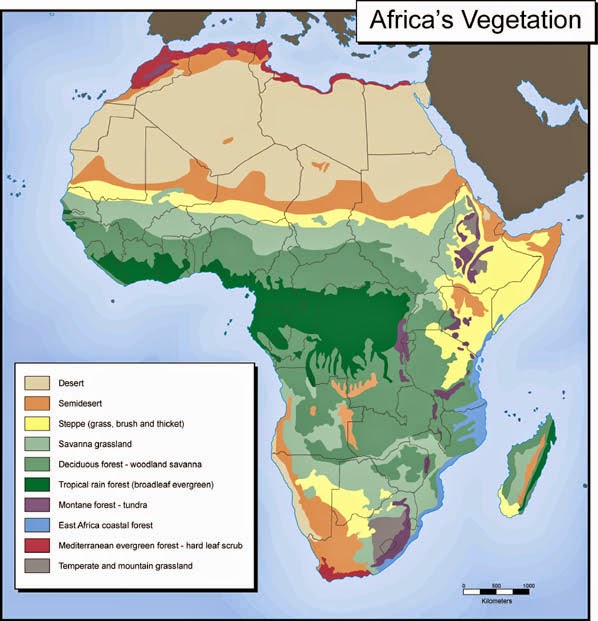 The 2000 pieces were not handed out until Jan 19! I was frantic. I sorted them. I cut more, lots more, where there was a colour or a 'reachy' lacking. LOTS more.  I bought fabrics that had every kind of African animal on it. Cut those down into 2" squares.

I started sticking them up on the design wall. My sister Marg and niece Carla came for a visit from out of province. They helped put squares up. When I came home from work at the end of the day I would scrutinize and then sew together what we felt was just right. My sister Vera came over and helped to sort and stack for the surrounding 9 patches. It was a huge effort to receive those squares on January 19, and have the quilt FINISHED, with binding, label and hand quilted by April 28...yes in the same year.


The quilt is called, "For All the Pretty Zebras". 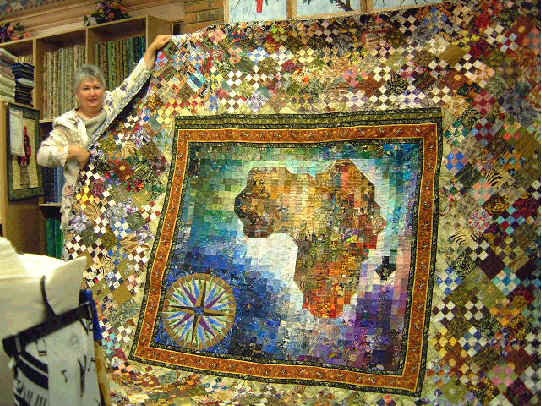 One of the great things about this quilt is that each participant in the 2" square exchange signed a white/light block with their name and those are included on the nine-patches on the left hand side and on the front of the quilt.

This week is my Diana's 32nd birthday. I can barely express the wonderful daughter she is and the amazing mother that she has become...love her to the moon and back.

And this posting is my 100th Blog-aversary.


Love and hugs to you all
Kathy

All things yellow...and one green beer.

I had occasion to be at my LQS this afternoon. I know...shock and awe!! That I would be at a quilt store to help celebrate Worldwide Quilting Day. It is always great to see my friends there and of course there is always lots of fabric and projects to discuss. And I did get the backing for my Grand Illusions quilt. And some w/b FQ's for my RSC15 (these I use for the backgrounds).

This week I also celebrated St. Patrick's day by attending a fun(d) raiser for my granddaughter's dance troup who are raising funds to finance their trip to Disneyland in July. Bring on the green beer. Cheers! 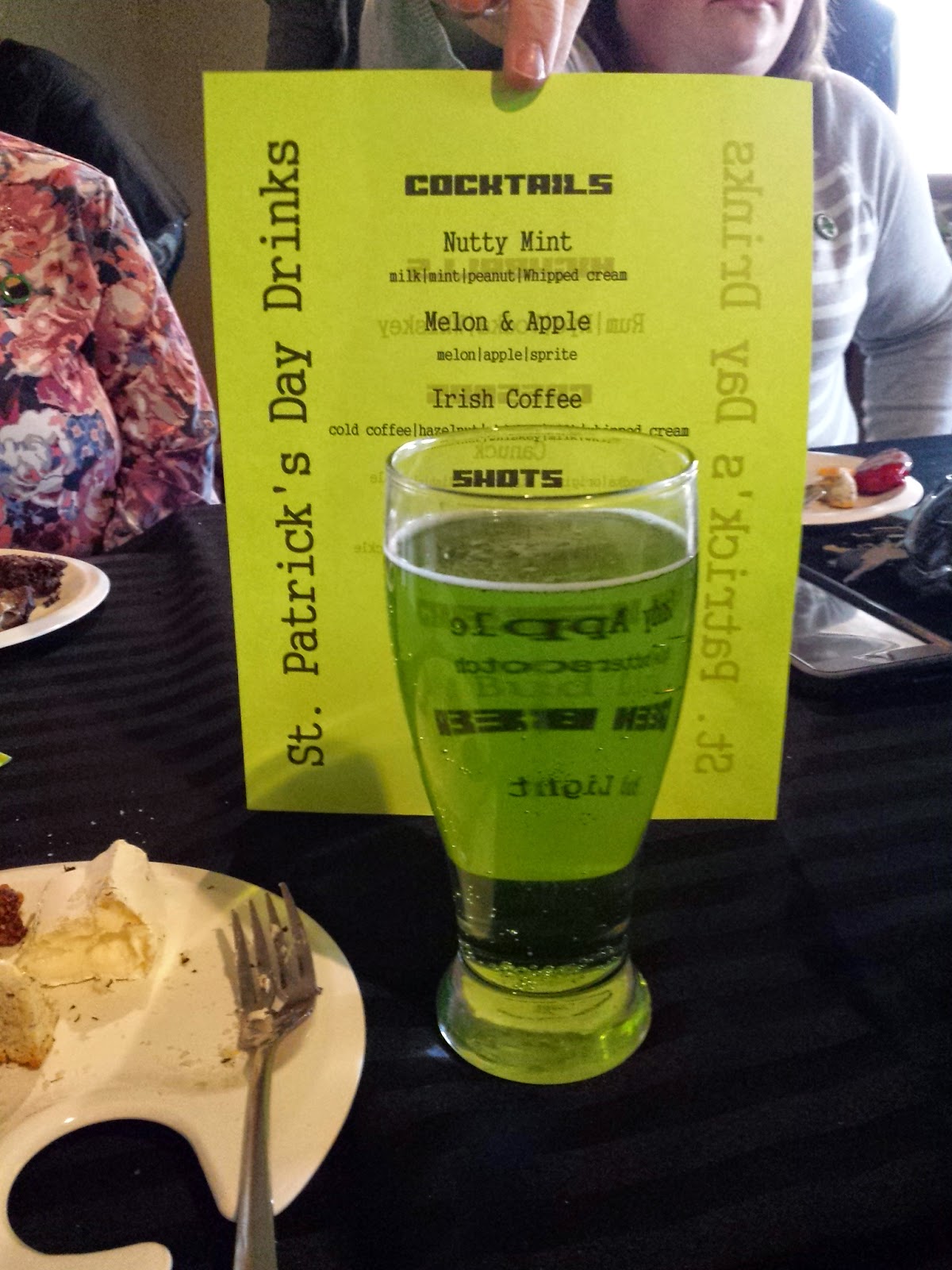 In celebrating yellow this week I have added another 17 to my yellow string blocks =40. These should have come with a warning. They are very addictive!! These combined with the blues and pinks should make another fun scrap-happy quilt. 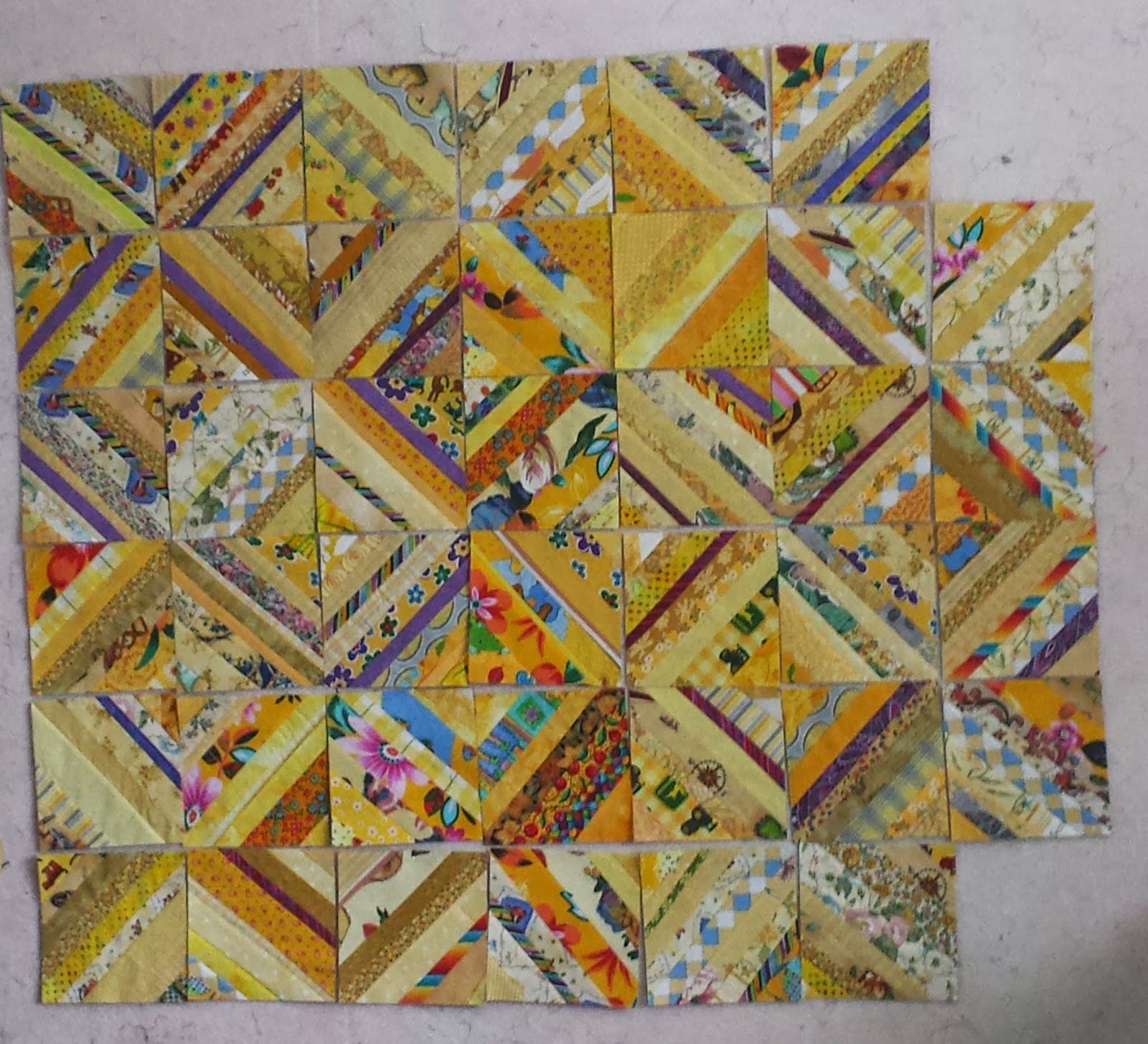 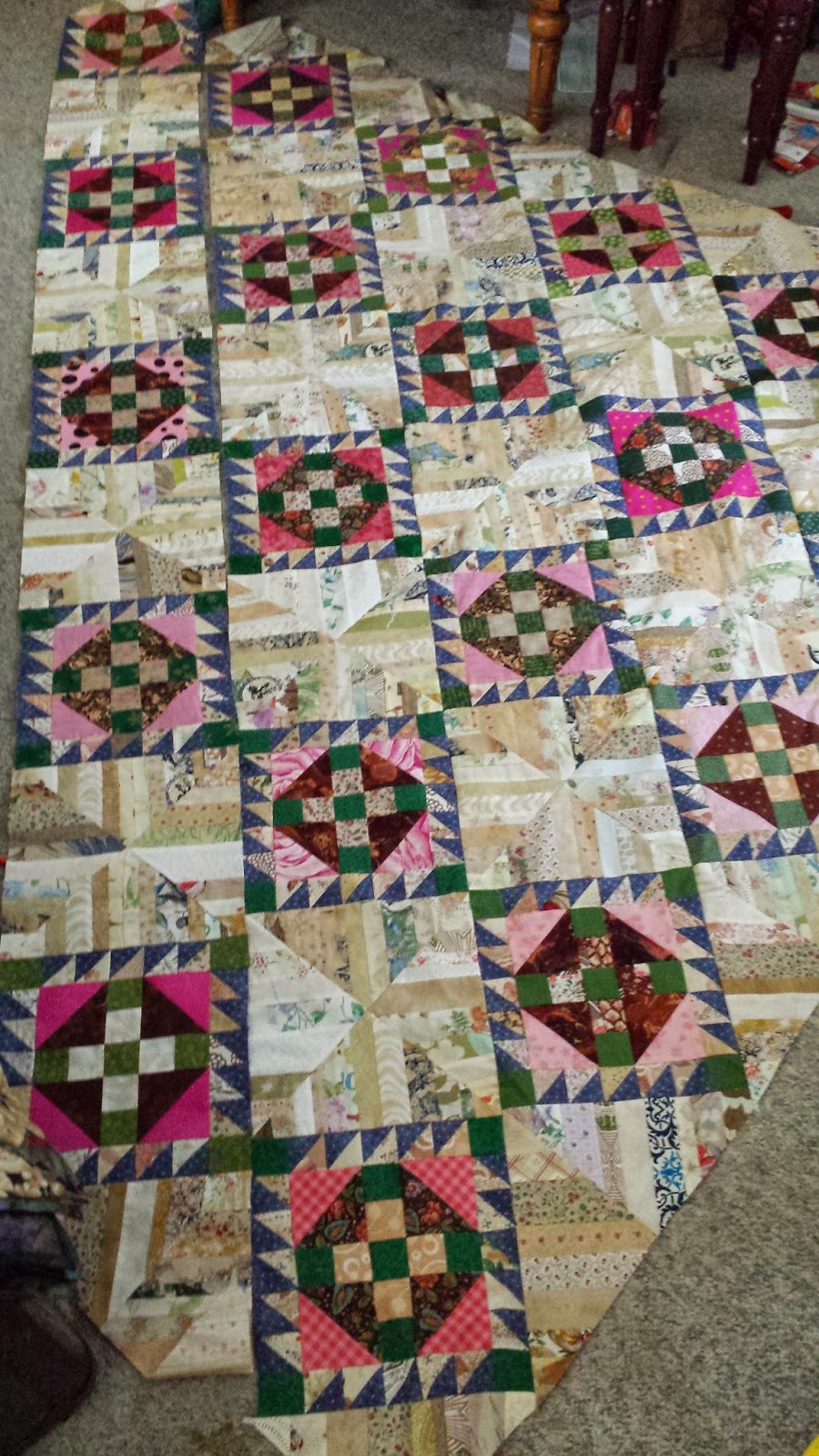 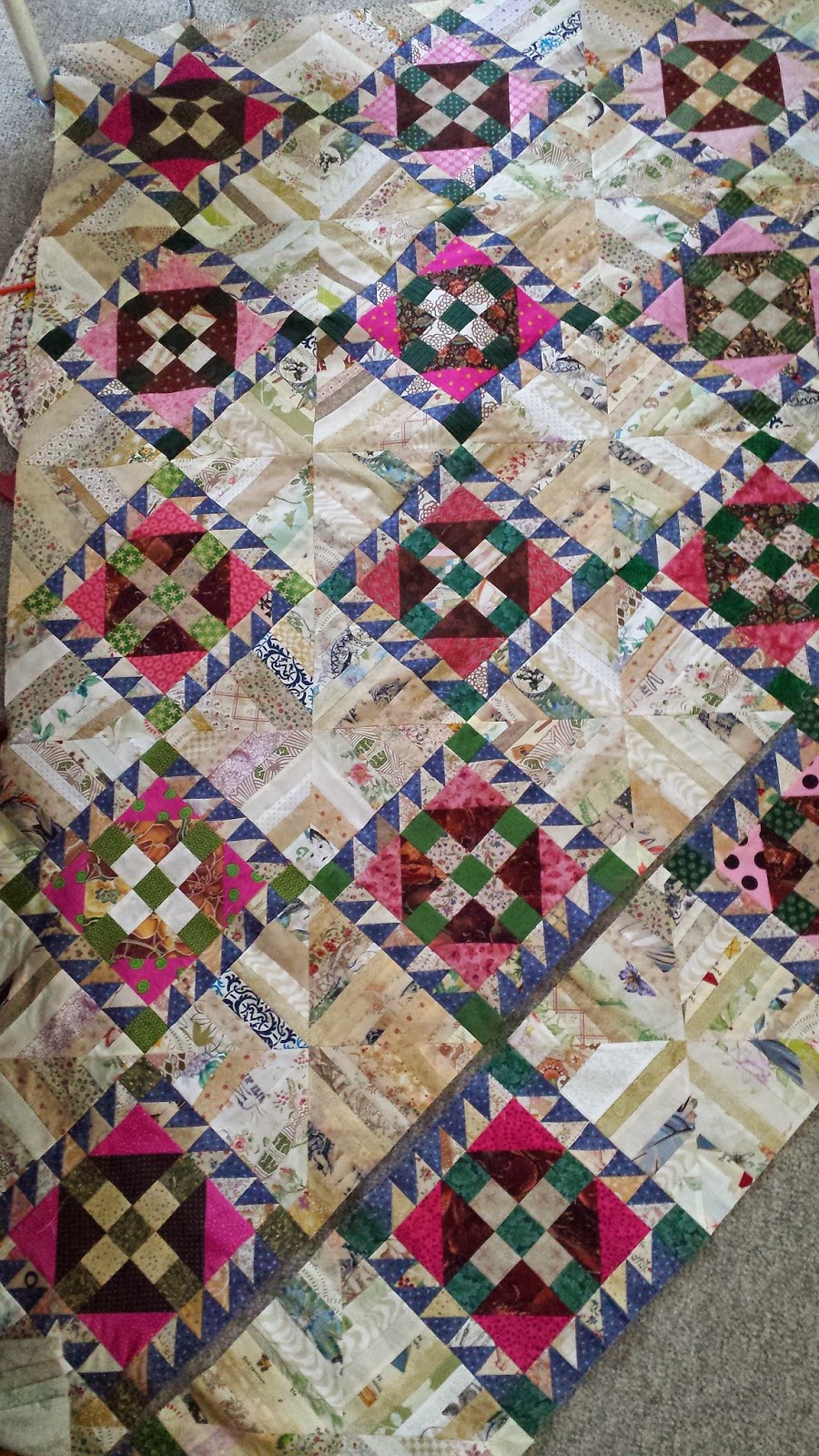 I also wanted to show you my completed Passionate Greys which had taken up residence in my daugther's home. I will borrow it back from her for our guild's Festival of Quilts coming up in June. This is her new beautiful rescue cat Renzo Purr-ini checking out the binding. 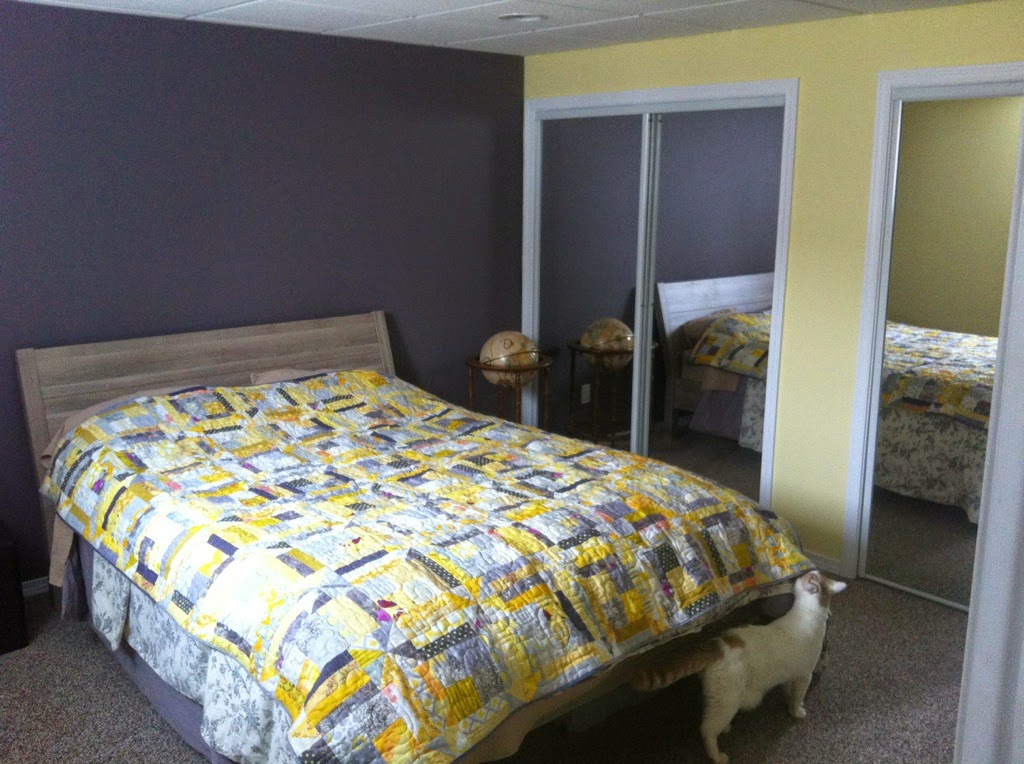 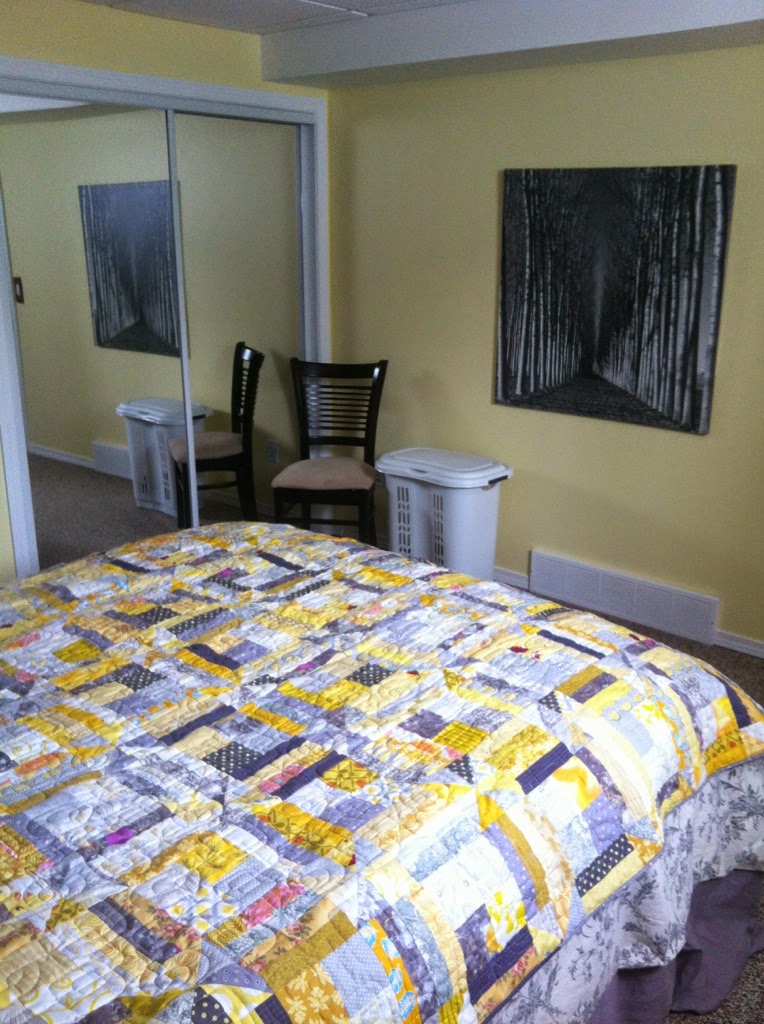 I wish you all full bobbins and straight seams (if that is your desire). To keep up with others and their yellow delights, head on over to SoScrappy and Oh Scrap!.

I have so enjoyed working with my yellow string blocks (as leaders and enders) this week as I move toward the finish line with RRCB. 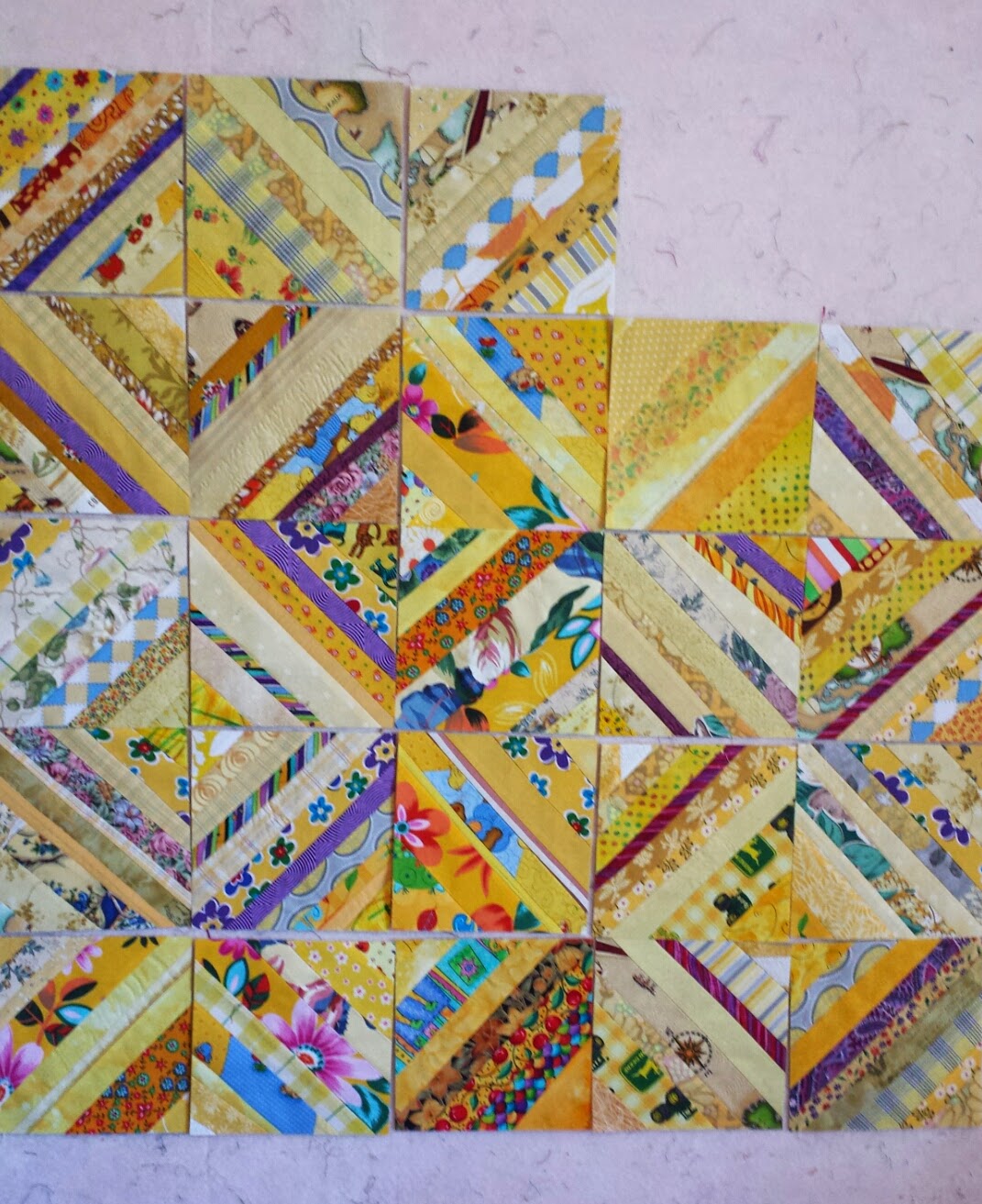 This Roll Roll Cotton Boll is so close to being a quilt top. You have to love a pattern whose first call to action is to make 600 hst's. These are now sewn into the surround for each of the 30 center blocks. 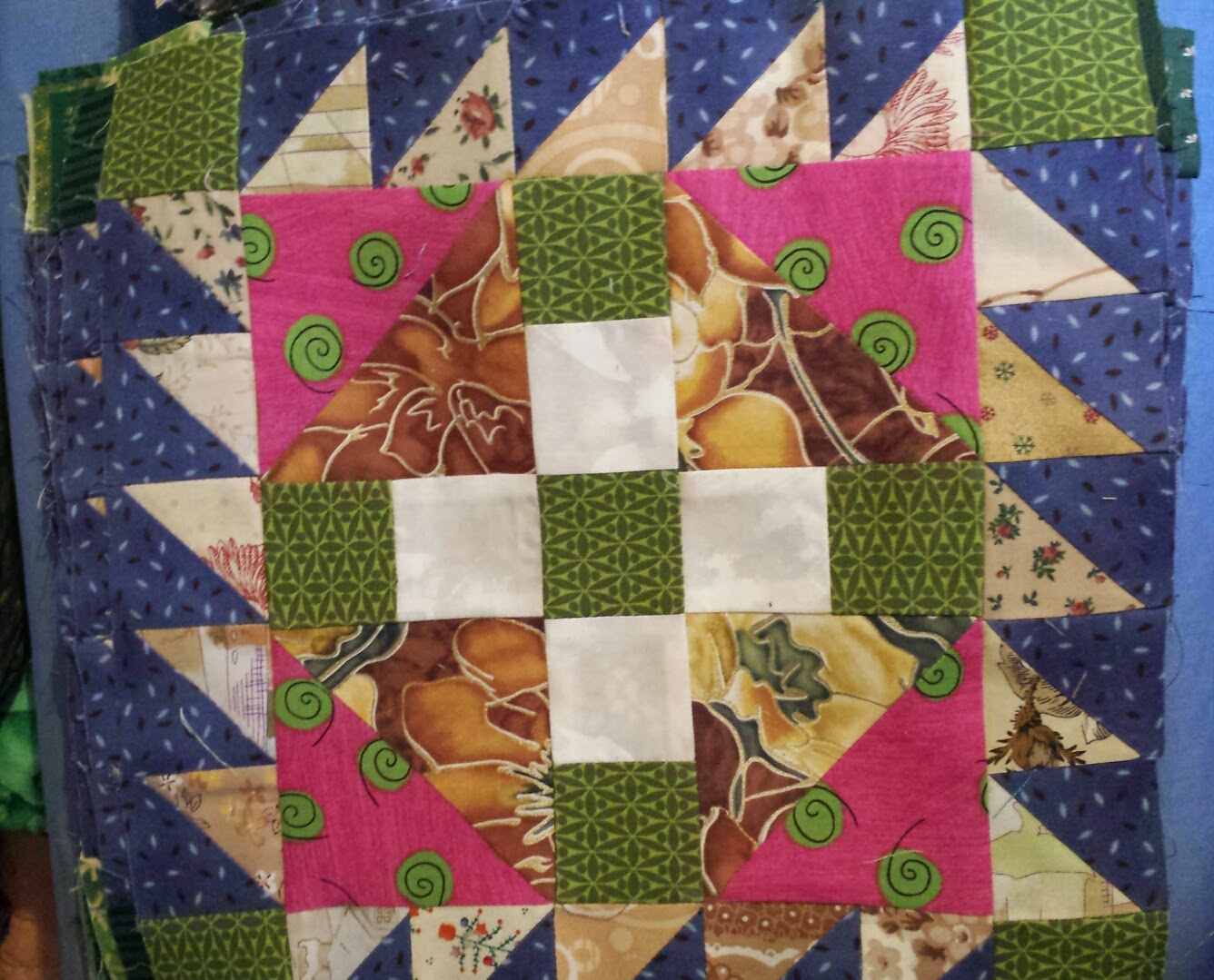 And all of the string blocks are made, and setting triangles (this pattern is set on point) also set aside. 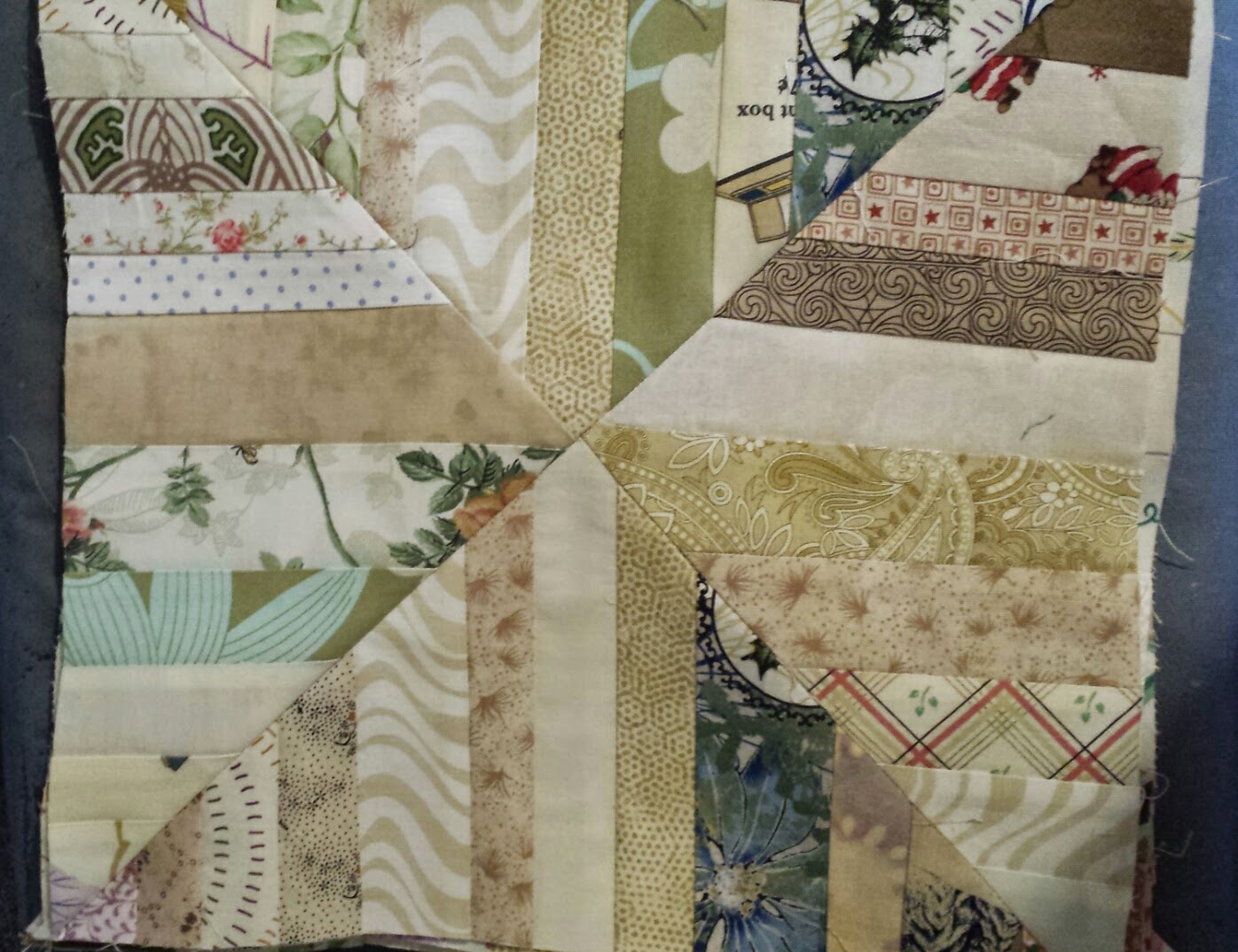 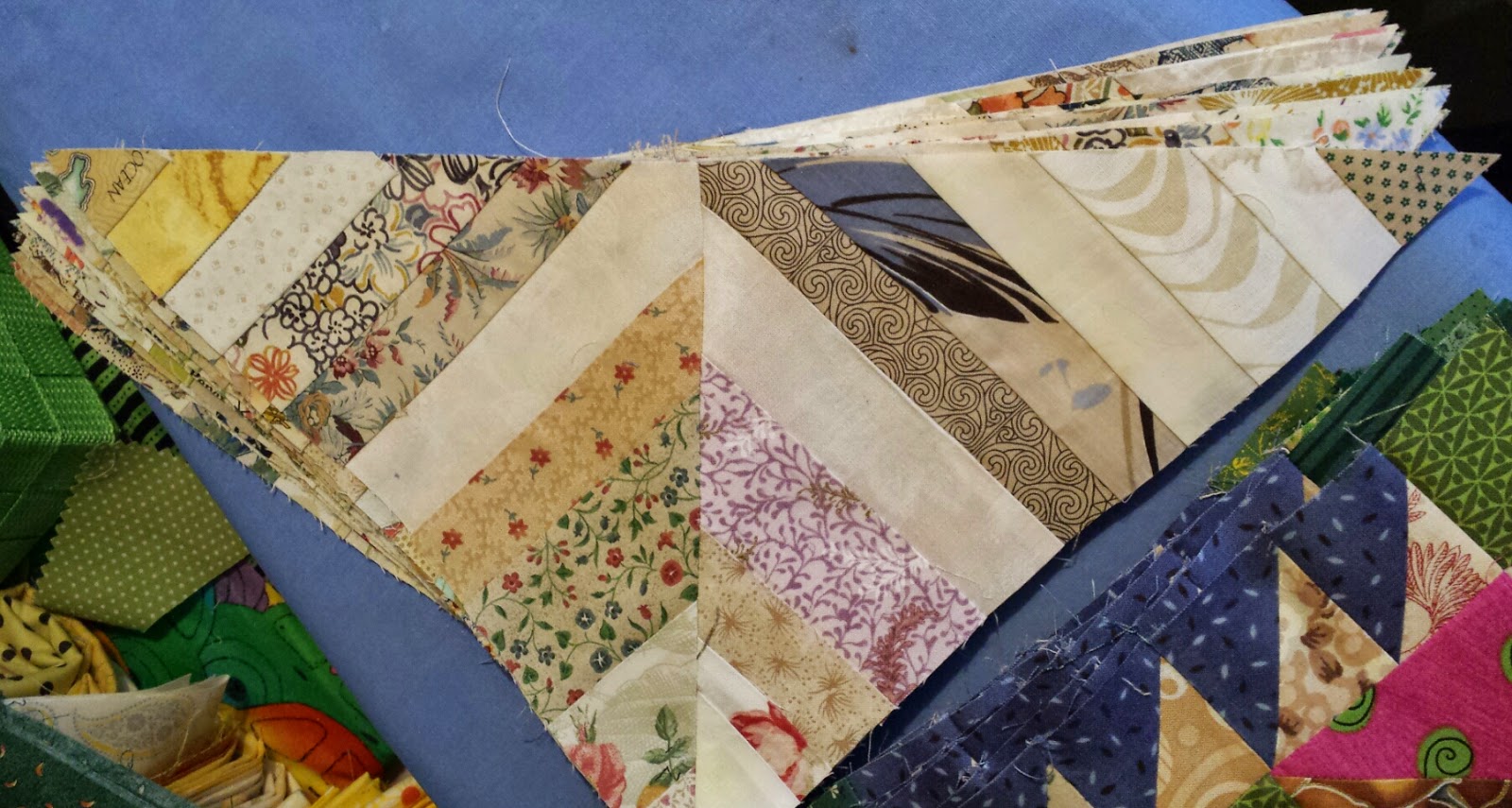 Sunday I will be having a Sew-What-Ever day with my bee-group. It could be a quilt top by 5 pm.

But all the whilst I was doing that I would nip in and out of my yellow scraps to complete the two RSC15 scrap blocks, Air Castle and Monkey Wrench. I realize that the Monkey Wrench/Sawtooth Points are made with the luscious Michael Miller Dots...which I have had a complete collection of in every colour for how many years...and what was I planning to do with this whole bin of loveliness? So it is not exactly a scrap, but it is time to cut it up and get into quilts that my family and I can enjoy. 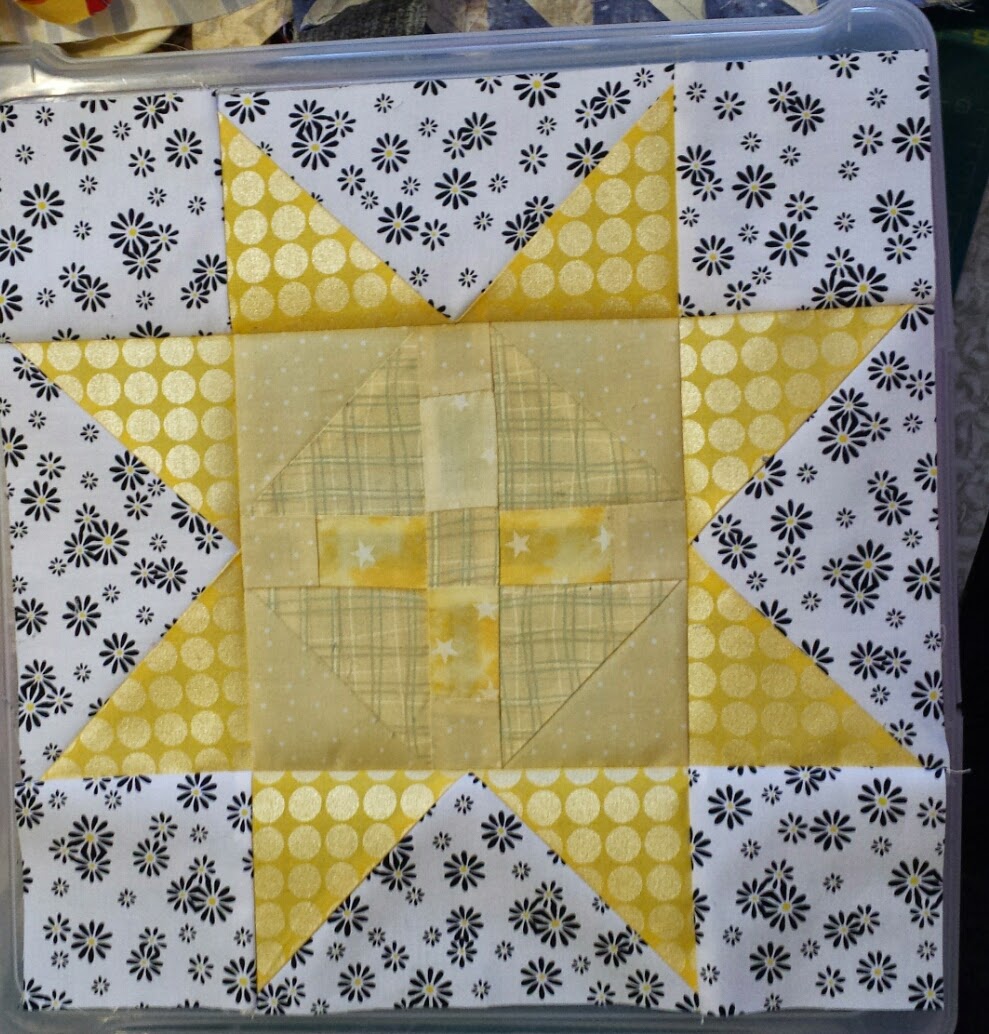 As well as my two RSC15 blocks, there are also the two 16 patch/Sawtooth Stars ready and waiting. 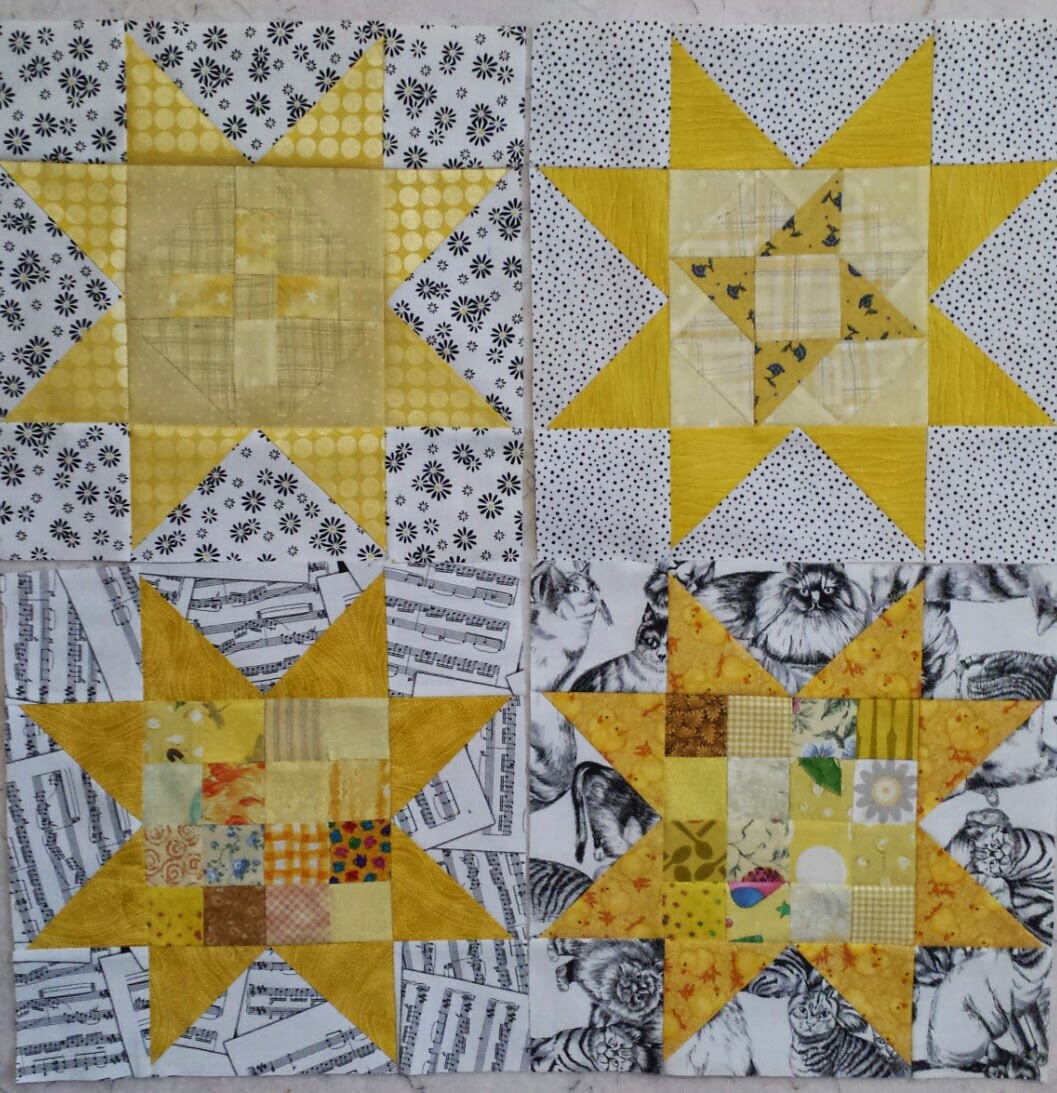 I have linked up with other yellow happiness over at SoScrappy.

Yellow as Light as 'Air' Castle

March has to be the happiest month for me so far this year...because its all about YELLOW. I have started out with a 16 patch to go with another that I had sew-ahead on in January. Just so bright and lovely and I love it. To that I have added my "Light as Air" Castle. I love this block!! 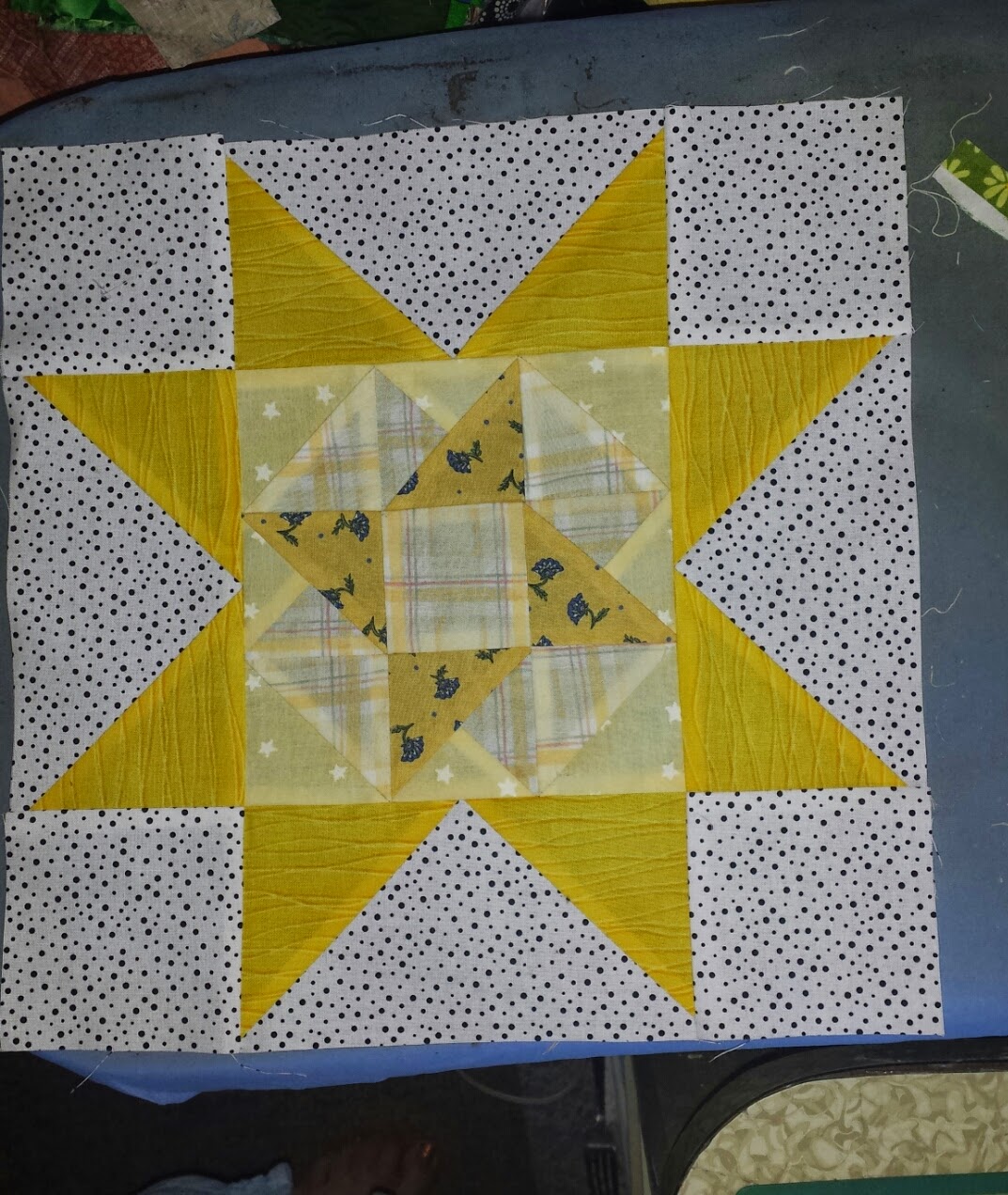 All the while I am working on my RRCB there are scrappy string blocks rolling through the machine. Honestly where do all these strings come from?

I took Saturday off to attend a Graphic's 45 (it is a scrapbooking line) class. The intention of the class is to develop stunning two page layouts that we (the students) would then take home and fill with our own photos. I did one of these in 2013 for my son and DIL of them and their family. It is one of the most awesome gifts I have ever given and it was a huge hit. This year I propose to do two albums simultaneously, for youngest son again, and also my youngest daughter and her family. I cannot show you the finished pages...remember...they're Christmas presents. But what I can show you is what I did with the left over bits. I created two "Project Life" pages for someone else. Those doing the RSC2015 will not even the scrapbookers are onto the colours of the month!! 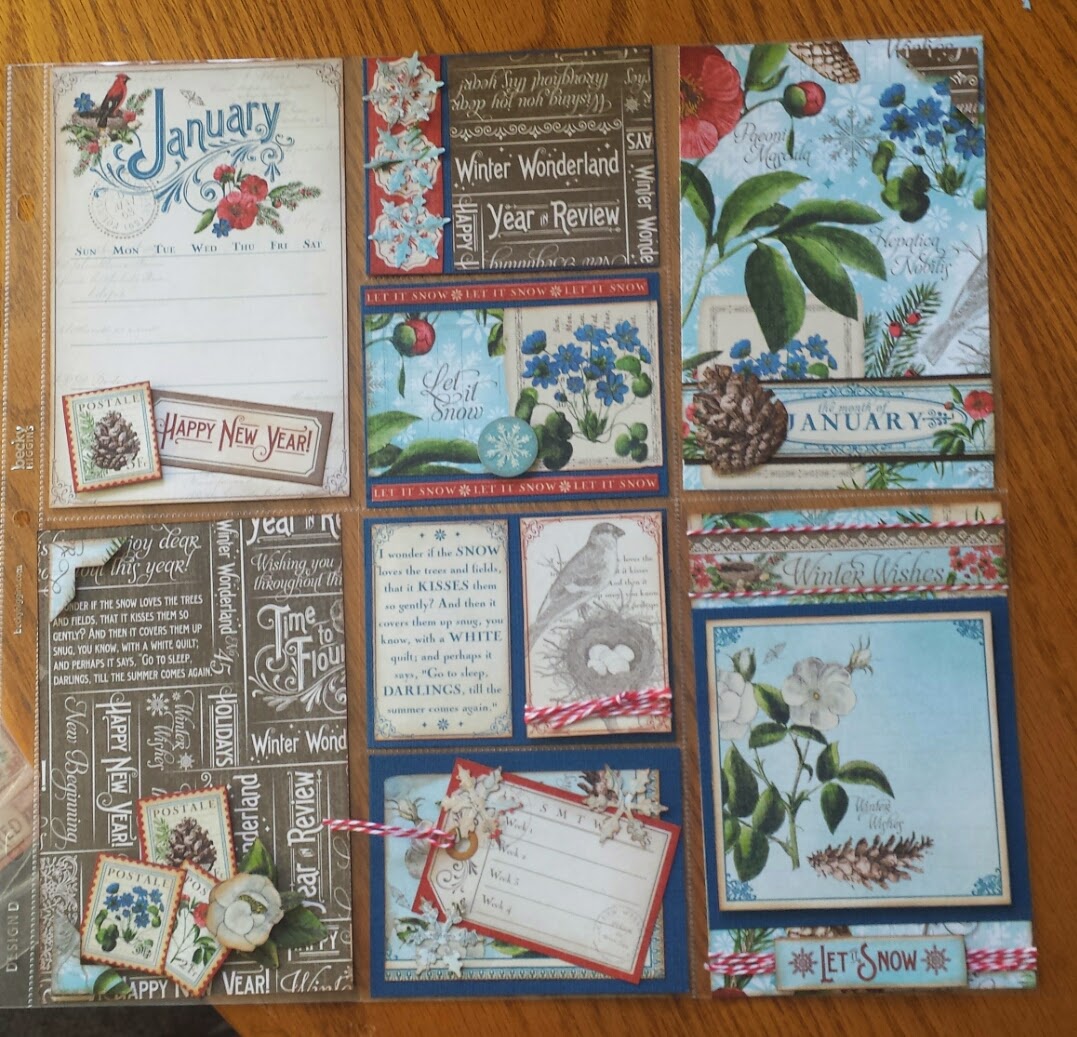 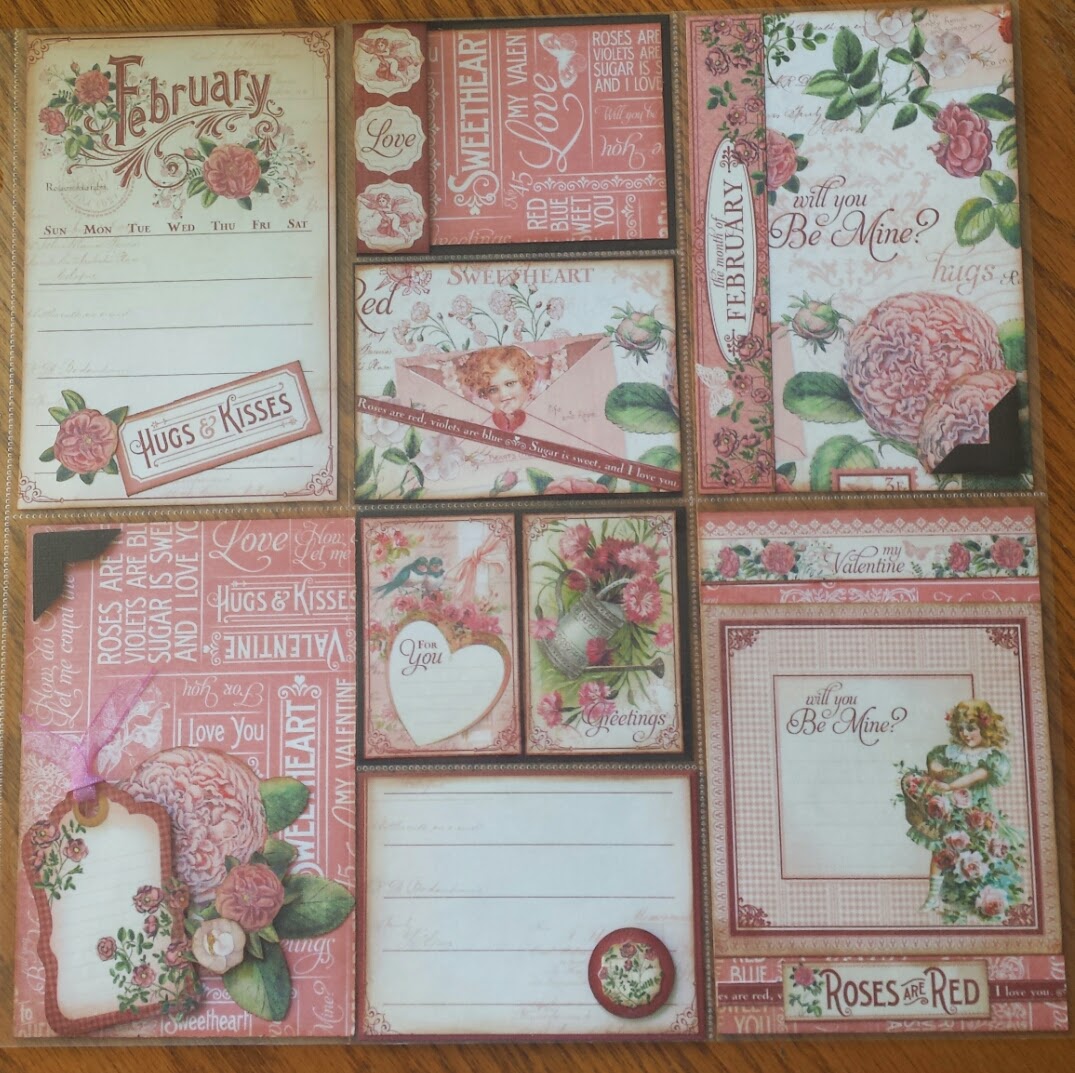 But now today it is back to grocery shopping, preparing lunches for the coming week and some more studio time this evening.

On the design wall this month is a wall-hanging top made by my dear late friend Lou Punko.  Lou was a founding member of my quilt bee group - The Group of 7. Each of us was given one of her tops to complete, and then to display at our up coming Festival of Quilts in June 2015. I am in the thoughtful stage. How to quilt? How to embellish? Inspiration will have to turn into action soon. 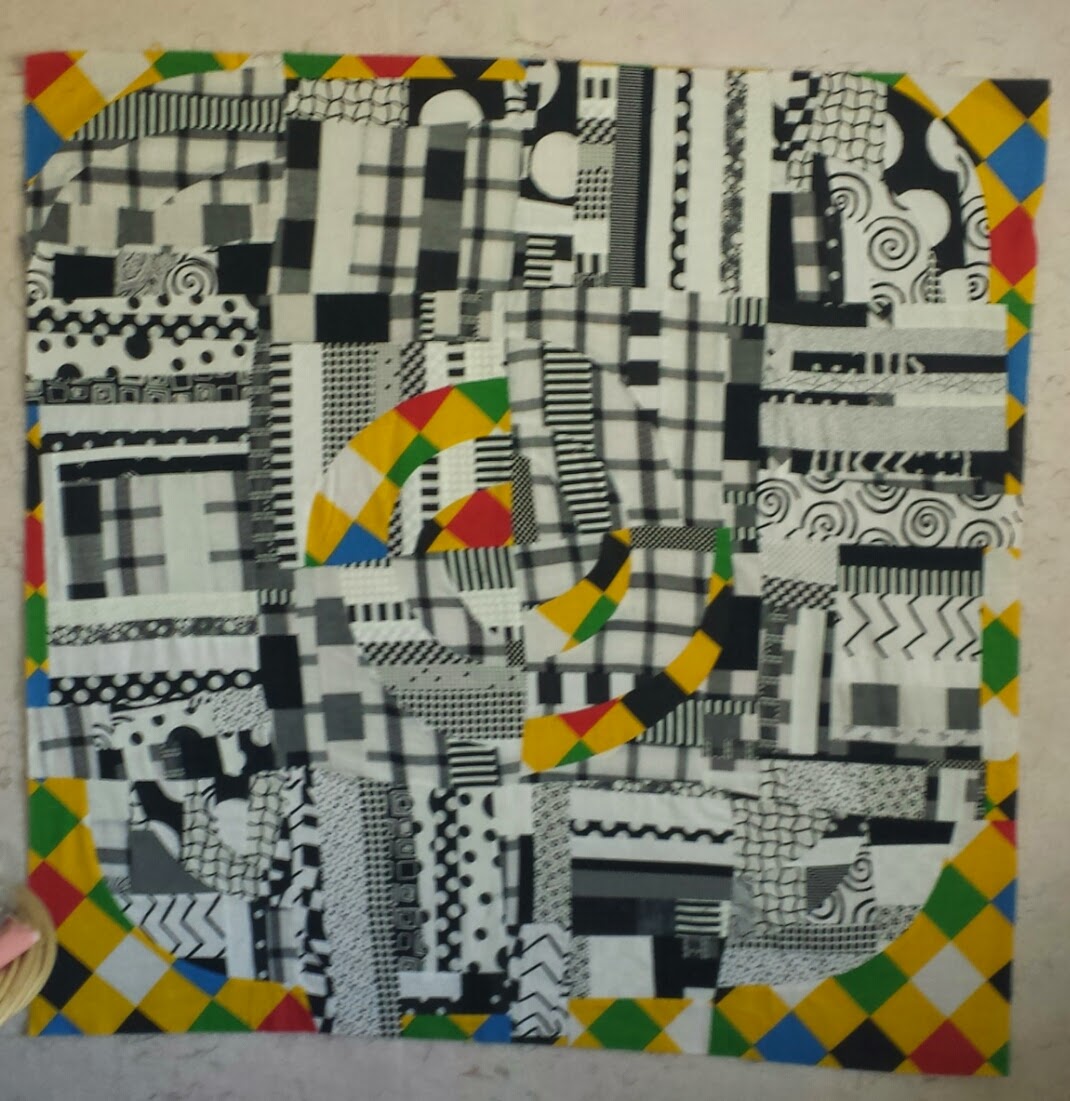 I am linking up to SoScrappy's linky party for more of the most fabulous colour EVER.

love and hugs
Kathy
Posted by Kathy's A Quilter at 11:53 AM 5 comments:

Slowdown Sunday...! when I feel so energized for accomplishing my deadline last night at midnight, all 600 2" hst's for the RRCB are completed. But I was quietly doing the happy dance in my head so as not to wake up the household at that time of night. 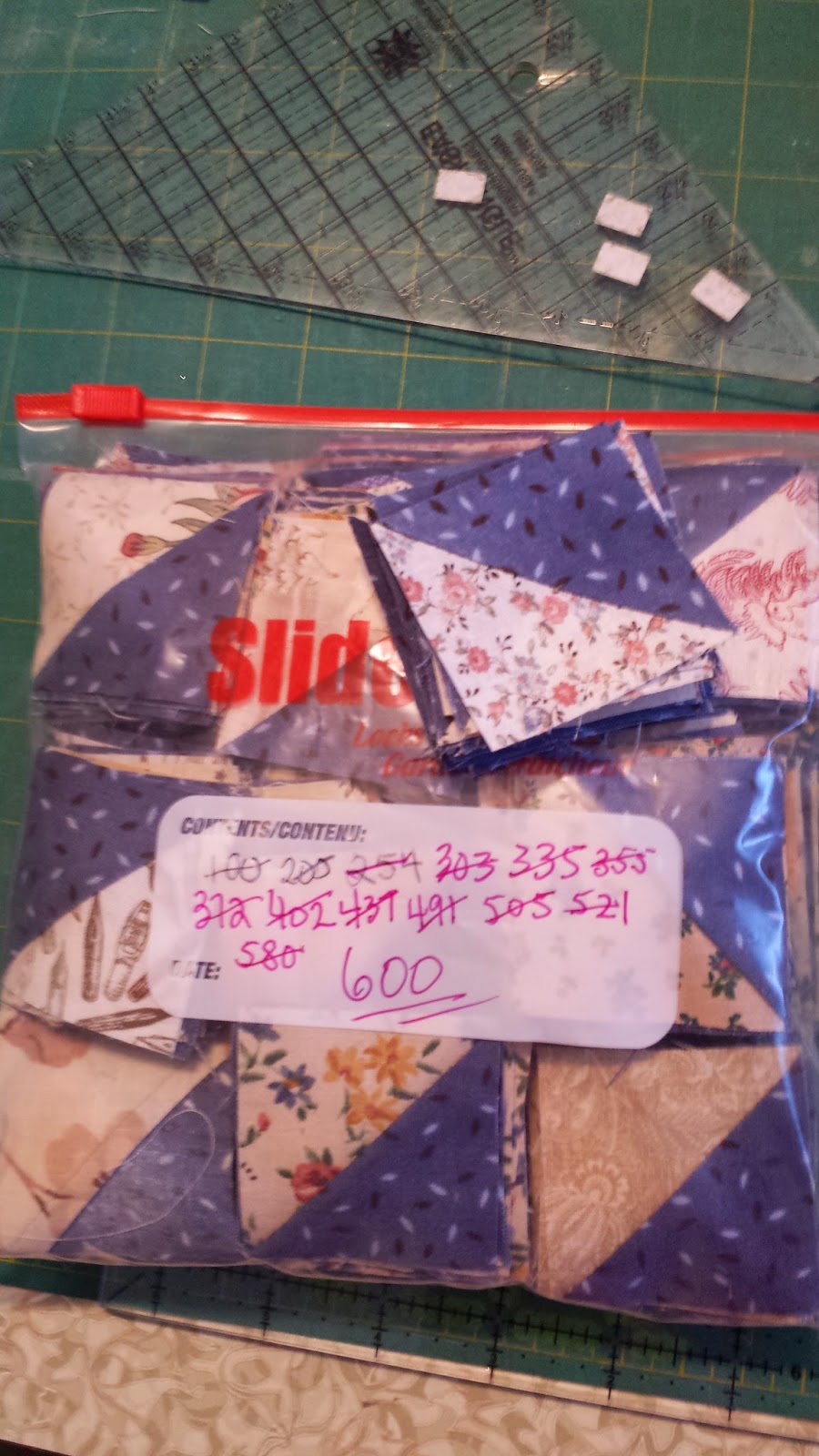 And so it hard to wipe the smile off my face this morning as I again celebrate that accomplishment by taking out some yellow 2" squares and making a 16 patch-throw-down in a yellow Sawtooth Star to get this yellow party started for RSC15. 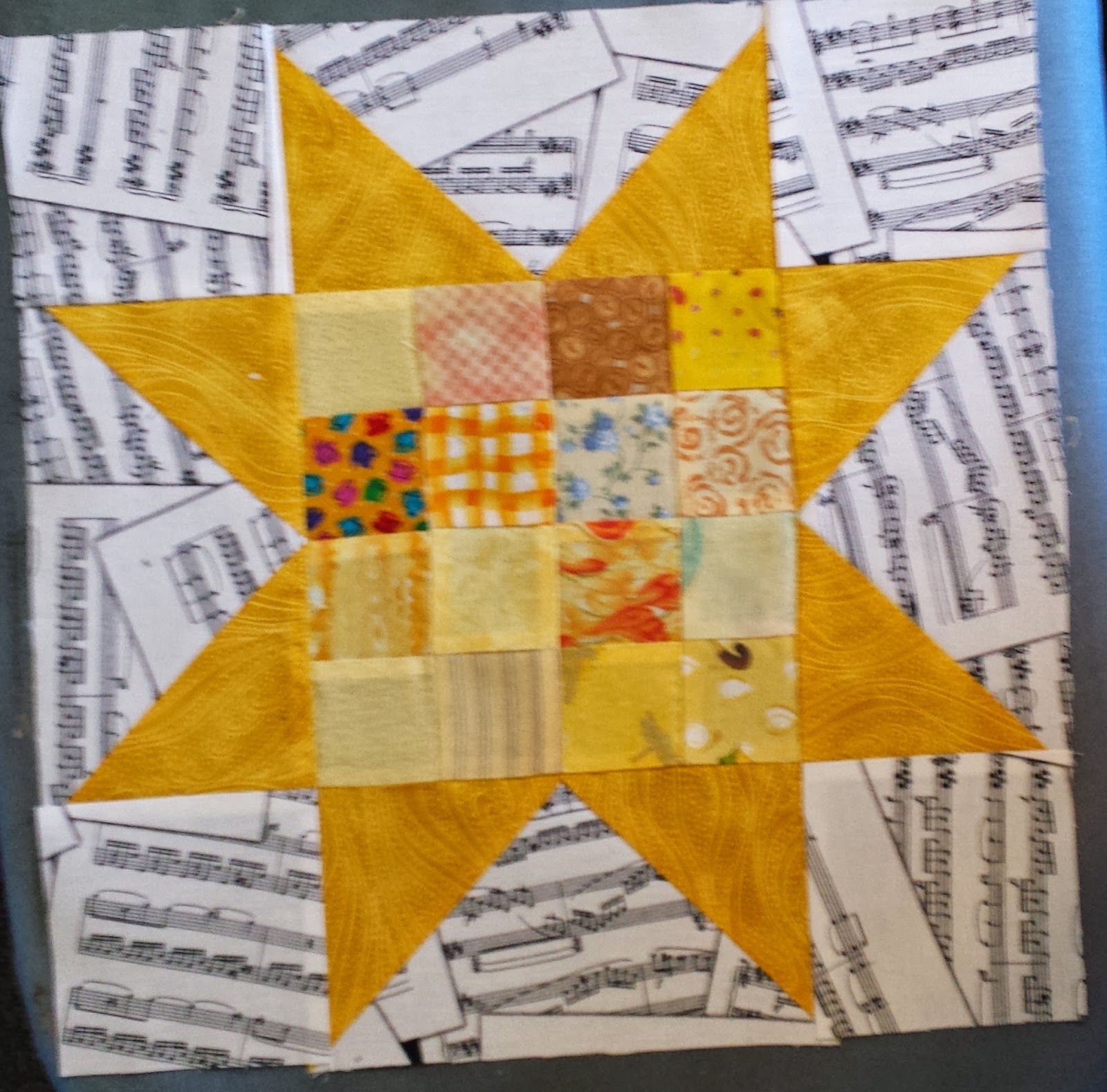 I was at an UFO day with my guild yesterday. It is always so wonderful when this group of highly talented and clever gals get together. In addition to wonderful quilts be finished and laughter shared, there are a few clever gems to behold. Like this flea shop find file holder, to take along and keep those that were using that table from getting their small rulers lost. Well done Colette. 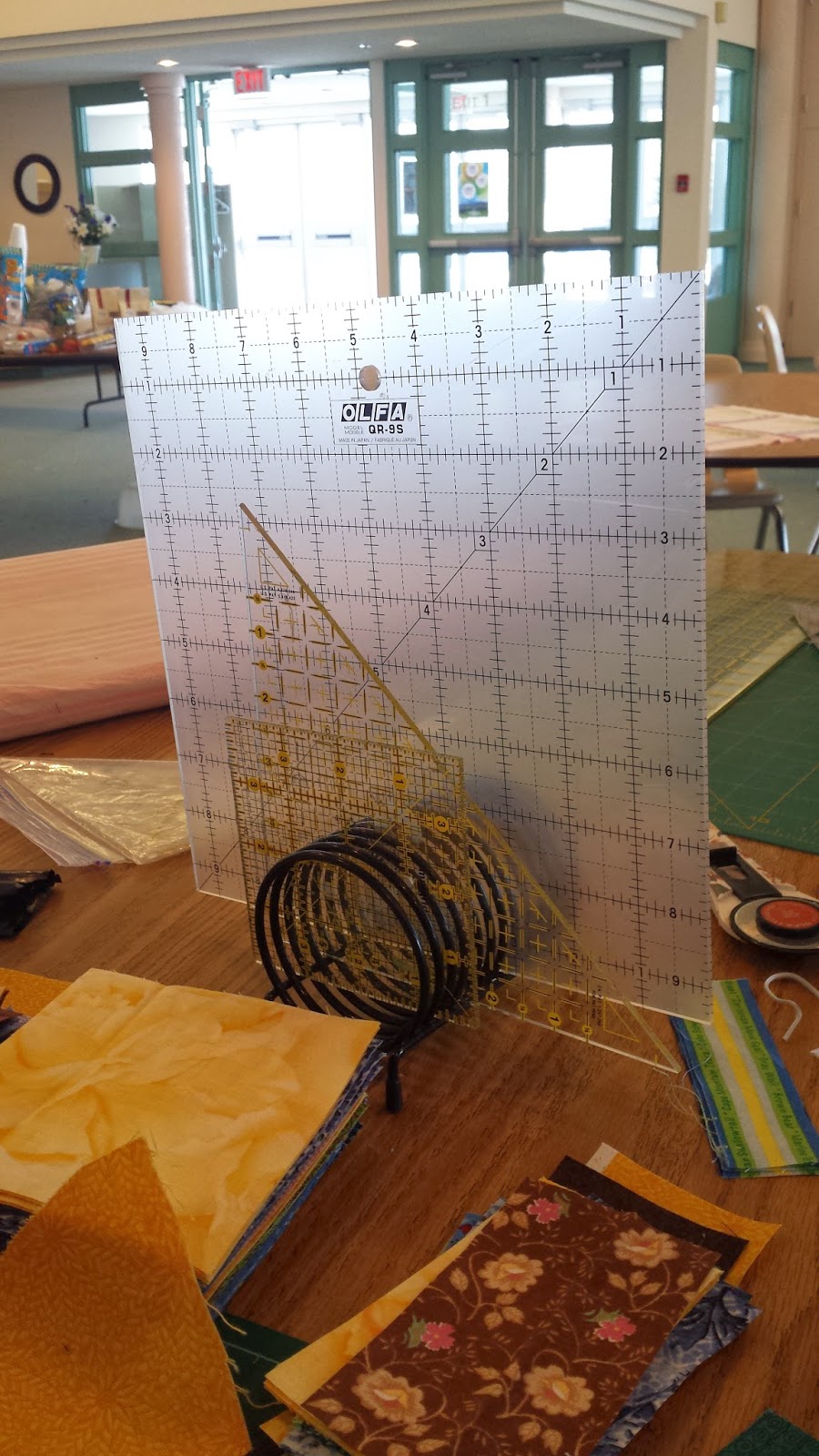 I will off this afternoon to do an audit of the Alberta Regional Lily Society books, but mostly to have a cup of tea and a cookie with another couple of lily growers. Once those books are out of the way, it will be all sorts of talk about our favourite of flowers.

Wishing you a pleasant slowed-down Sunday

Love and Hugs
Kathy
Posted by Kathy's A Quilter at 8:46 AM 8 comments: