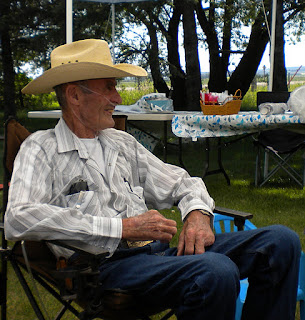 My brother-in-law Bill MacKinnon left us yesterday, January 9, 2012. While he was here and before he left he made sure of a few things.

He raised with my sister Marg two beautiful daughters: Carla and Mary and one son: Doug.

He showed a granddaughter Jamie and grandson Billy what it was to be loved so unconditionally that he became their best friend. He could have been hardly have been prouder to welcome his great granddaughter Savannah into his life.

He taught them all how to ride, how to drive, how to treat people with respect and how to get the most of every moment.

He rode high into the mountains of Jasper National Park and Willmore Wilderness, and had memorized every horse's name, wrecks he had, trails he rode, peaks he saw and every great spot he camped. He was also known to tie knots in small saplings at the tree line, or so it is rumored. If you find one I would love a picture.

He was the original maker of "witches brew", aka pancakes which were always served with peanut butter and jam. This was washed down with generous cups of black coffee.

There are countless stories of his compassion, fortitude, resourcefulness and generosity that will be told at his memorial service on February 18.

He was so special and such a good friend to me. He is riding with the angels now and I already miss him terribly.
Posted by Kathy's A Quilter at 10:00 PM 6 comments: 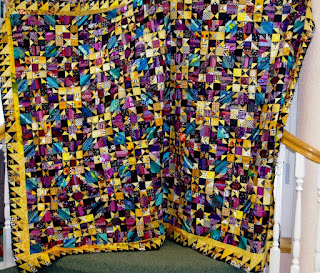 UPDATE: February 6 2012. Top is done. Apologies for the very human fold but Betty was doing her very best.

Thank you Bonnie for your inspiration and leadership. I can hardly wait for the next one.

Imagine the frustration. I was without internet and phone service for the past 9 days. Well I had other things to do, like make the 4 more Ohio Stars that I had somehow miscounted. 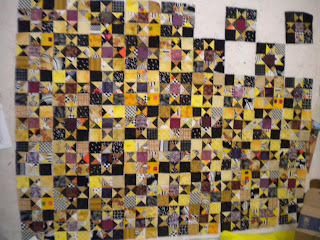 In desperation to get my Orca Bay fix I did go round to the public library to get caught up on all the new Mr Linky posts that were happening. I did call my DD after new years (not knowing the next clues were going to be released) and she read the #7 clue to me so that I could get my flying geese made. Those went together amazingly fast.
Then I talked to Cathy Tomm and she explained over the phone (cell) how to contruct the rows. Since I have gone back to work full time now, I make the most of those hours between 5 and 7 am by working on Orca Bay and my other MQ. 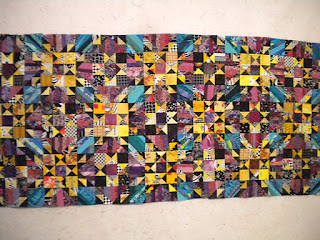 The following quilt I did at a LQS Dec 27-30 with my friend Maureen. We give each other the gift of time for Christmas by taking this 4 day class together. 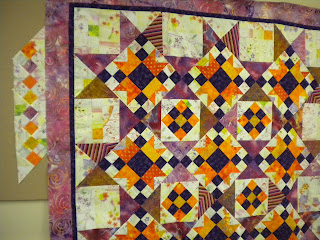 (Near) Completed pictures shall be posted after the weekend.

Wishing you all a very happy and creative new year. Many many thanks to Bonnie for your generosity of spirit and talent.
Posted by Kathy's A Quilter at 7:46 PM 10 comments: