My parents moved with 10 children from Saskatchewan to Alberta the year I was born, 1951. It was to custom growing up in this large family that the Christmas tree did not come into the house until Christmas Eve. We children, from a large range in ages, would spend the afternoon decorating that tree. Mother would bring out the few commercial decorations out and we would make the rest. We would have saved papers to cut these apart and glue into paper ring garlands...by the yard. This may be one of the only surviving commercial decorations. A small bakelite reindeer. 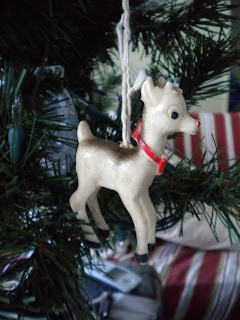 My father, once outside chores were complete, would boil russet potatoes til done, then mash with icing sugar to the desired consistency. These little potato balls were dipped in Bakers Dark Chocolate. The centers with flavored with peppermint, chopped maraschino cherries or crushed candy canes. Dipping those chocolates was made easier by using Mother's metal sock knitting needles.

While all this was going on my mother was making our HUGE Christmas Eve meal. My father would take us kids to evening church service. My mother would use this time for a much needed breather from her task...or get the finishing touches on dinner.

When we came home it was time to sing to the Christmas tree...now aglow with real candles (only on a fresh tree would it be possible) and starting with the youngest child in attendance we all sang the that child's favorite. Then up through the ranks, youngest to oldest, every one got to pick their favorite Christmas carol that we sang. Even if you had to sing the same song more than once (or three times or four). Singing was finished with my mother singing The Lord's Prayer. She had an amazing voice.

Then in turn again starting with the youngest we blew out the candles one at a time. This was the signal it was dinner time. Once that glorious meal was over we got to open one present and play with it before bedtime...when ever that was...sometime around midnight or later.
Posted by Kathy's A Quilter at 7:40 PM